The Regent Road cycle lane was almost completed 18 months ago, with the serious omission of the planned traffic lights on the Bascule Bridge.
The narrow width of the bridge meant the cycle lane could not continue across it, and the lights were to allow cyclists to cross the bridge safely.
Without the lights, cyclists have to either check the motor traffic and chance the road, or use the rickety wooden pathway.
The wooden pathway had fallen into disrepair and become dangerous, so MCC member Paul Rogers complained to Liverpool City Council (LCC) and put in a Freedom of Information request to find out why the route remains unfinished.

In response, LCC explained that the Bascule Bridge is owned and maintained by Peel Ports, and that LCC would raise the walkway issue with them. Some work has now been done on the walkway, but it is still uneven and slippery when wet.

On the issue of the traffic lights, LCC said that the contractor working on the scheme had gone into administration and that a new contractor would be appointed in “the next couple of weeks”. Dates of when the work will be done will be publicised after that appointment. 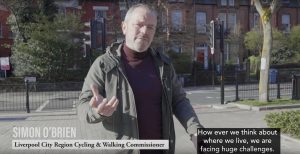 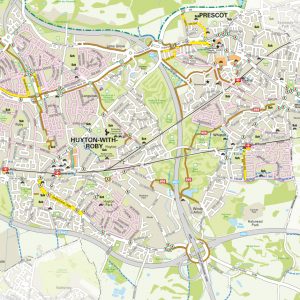 A new up-to-date cycle map is now available for Knowsley to help you plan safe cycling routes throughout the borough https://orlo.uk/PgTIP